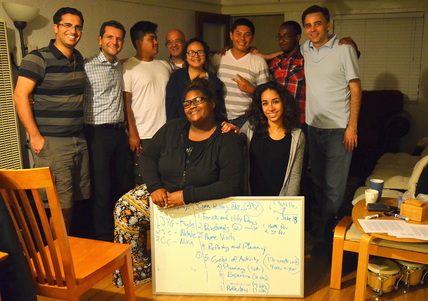 The Bahá’í Faith is a monotheistic religion which emphasizes the spiritual unity of all humankind. Three core principles establish a basis for Bahá’í teachings and doctrine: the unity of God, that there is only one God who is the source of all creation; the unity of religion, that all major religions have the same spiritual source and come from the same God; and the unity of humanity, that all humans have been created equal. According to the Bahá’í Faith’s teachings, the human purpose is to learn to know and to love God through prayer, reflection and service to humanity.

The Bahá’í Faith was founded by Bahá’u’lláh in 19th-century Persia. Bahá’u’lláh was exiled for his teachings from Persia to the Ottoman Empire and died while officially still a prisoner. After Bahá’u’lláh’s death, under the leadership of his son, Abdu’l-Bahá, the religion spread from its Persian and Ottoman roots, and gained a footing in Europe and America, and was consolidated in Iran, where it suffers intense persecution. After the death of Abdu’l-Bahá, the leadership of the Bahá’í community entered a new phase, evolving from a single individual to an administrative order with both elected bodies and appointed individuals. There are more than 5 million Bahá’ís around the world in more than 200 countries and territories.

In the Bahá’í Faith, religious history is seen to have unfolded through a series of divine messengers, each of whom established a religion that was suited to the needs of the time and to the capacity of the people. These messengers have included Moses, Jesus, and Muhammad, as well as Krishna, Buddha, and others. For Bahá’ís, the most recent messengers are the Báb and Bahá’u’lláh. Humanity is understood to be in a process of collective evolution, and the need of the present time is for the gradual establishment of peace, justice and unity on a global scale.

The Bahá’ís have been an active in the religious and social life in America since the late 1800’s. We are a recognized advocate for spiritual solutions based on the teachings of Bahá’u’lláh on issues such as the elimination of all forms of prejudice with an emphasis on race unity, the equality of women and men, the spiritual education of children, the importance of family cohesion, and the establishment of world peace. Bahá’u’lláh is God’s Messenger for this day, a day in which all humanity is spiritually mature and can attain the reality of uniting to build the Kingdom of God on Earth.